About Us | Technical Information

Hydrocracked Base Oils What Are They?

Before describing the Hydrocracking process and comparing it to the Solvent Refining process, we will first review the general principles of lubricant base oil manufacture. Lubricant base oils are produced in a series of steps, which are designed to enhance certain desirable properties. These include viscosity index, oxidation resistance, thermal stability and low temperature fluidity.

Starting from petroleum crude oil, the typical process for making a lubricant base oil is as follows:

Generally both Solvent Refined and Hydrocracked base oils are manufactured this way, but differ in the methods employed

Developed over seventy years ago, this process attempts to remove the undesirable components from the feed, by solvent extraction. Initially, light oils such as gasoline, diesel, etc are separated from crude petroleum by atmospheric distillation. The resulting material is charged to a vacuum distillation tower, where lubricant fractions of specific viscosity ranges are taken off. These fractions are then treated individually in a solvent extraction tower. A solvent, e.g., furfural, is mixed with them and extracts about 80% of the aromatic material present. After reducing the aromatic content, the solvent extracted lube fraction is dewaxed by chilling to a low temperature, which removes much of the wax and so improves the low temperature fluidity of the product. Finally, the dewaxed lube fractions are sometimes finished to improve their colour and stability, depending on the application requirements. One common method of finishing is mild hydrofinishing. This step should not be confused with Hydrocracking process, as conditions of temperature and pressure in hydrofinishing are mild and less effective.

In the Hydrocracking process, the elimination of aromatics and polar compounds is achieved by chemically reacting the feedstock with hydrogen, in the presence of a catalyst, at high temperatures and pressures.

Several different reactions occur in this process, the principal ones being:

These reactions take place at temperatures as high as 400?C, pressures around 3000 psi and in the presence of a catalyst. The hydrocarbon molecules that are formed are very stable and this makes them ideal for use as lubricant base oils.

There are three stages in the Hydrocracking process. The first one removes unwanted polar compounds and converts the aromatic components to saturated hydrocarbons. After separation into desired viscosity grades by vacuum distillation, batches of waxy lube base oil are hydrodewaxed. These are then passed through another hydrocracker for additional saturation. This final step maximizes base oil stability, by removing the last traces of aromatic and polar molecules and is called hydrofinishing.

Hydrocracking results in base oils having the following attractive features:

These features give performance characteristics in finished lubricants very similar to synthetics, such as poly-alpha-olefins (PAO).

Comparison of the Products of Hydrocracking and Solvent Refining Base Oils

– Manufactured by hydrocracking and solvent or catalytic dewaxing and hydro-finishing processes. Group II base oil has superior anti-oxidation properties since virtually all hydrocarbon molecules are saturated. It has water-white color.

– Manufactured by special processes such as isohydromerization. Can be manufactured from base oil or slax wax from dewaxing process.

What is Oil Oxidation?

Over time, oil tends to break down by reacting with dissolved atmospheric oxygen. This oxidation starts a chain reaction that first forms hydro peroxides and then progresses to other oxidation products – all of which increase acidity and viscosity, darken colour, and leave surface deposits and varnish. By eliminating the initial hydro peroxides and by interrupting the chain sequence, oxidation-inhibiting additives slow this deterioration rate by more than a hundredfold.

Useful life continues through an induction period as the oxidation inhibitor supply is slowly depleted.

Deterioration rate depends strongly on temperature. Although adding an inhibitor delays life-ending breakdown, slow accumulation of oxidation products and contaminants such as wear particles and soot in engine oils eventually signal a need for an oil change.

Typical test lives in the table below indicate there is an approximate threefold increase with hydrocracked Group II base stocks compared to Group I for premium turbine grade and hydraulic mineral oils used in turbines, compressors, electric motors and generators, and a wide range of industrial applications.

1. What are hydrocracking and hydrodewaxing?

2. What do Group I, II, and III mean, and what?s so great about Group II and Group III?

Groups I, II, and III are broad categories of base stocks developed by the American Petroleum Institute (API) for the purpose of creating guidelines for licensing engine oils. Typically, solvent-refined base oils fall into Group I, while hydro processed base stocks fall into Group II. Unconventional Base Oils (UCBOs) or Very-High VI stocks are normally categorized as Group III.

Group I oils contain high levels of sulphur and aromatics, which are compounds that can diminish performance. Group II & III oils have lower levels of these impurities, which result in enhanced oxidation performance for fully-formulated lubricants. With hydrodewaxing technology, Group II and III base oils have low-wax composition, which delivers improved low-temperature performance compared to conventional Group I base oils.

Due to their high level of purity, Group II & III base oils provide additional benefits in crankcase applications. For example, in heavy-duty engines, motor oils made with Group II & III base oils have demonstrated a soot dispersancy markedly higher than those made with conventional base oils. They have also demonstrated potential for greater fuel economy in passenger car engine oils.

Group II & III base oils contain lower levels of reactive compounds compared to solvent-refined Group I base oils. These ?impurities,? which include aromatics and sulphur compounds, are much more susceptible to oxidative attack. Once these compounds begin to oxidize, a complex chain of reactions occurs that ultimately causes both the base oil and the additive to degrade. The virtual absence of these impurities means Group II & III base oils deliver exceptional resistance to oxidation.

A recent ruling from a respected advertising self-regulatory body decided a case on the use of the term synthetic. It found that synthetic base stocks are not limited to PAOs. The decision said that the key requirement for calling a base stock synthetic is that it be the result of conversion or processing of one complex mixture. Group II & III base oils clearly meet the test.

5. Are Group II & III base oils better for the environment?

Yes. Group II & III base oils have low toxicity as measured by eye and skin irritation, inhalation, and oral and dermal toxicity tests. They are neither mutagenic nor carcinogenic, as indicated by their performance in the modified Ames test and IP346 polycyclic aromatic test. In fact, these base oils are so pure, they meet the requirements of FDA-approved mineral oils (21CFR 178.3620(c)). This means that Group II & III base oils can be used in or used to manufacture a variety of non-food articles intended for incidental contact with food.

6. Why should I use Hydrocracked base oils?

Hydrocracked base oils can be formulated with a wide variety of additives either to achieve the latest industry specifications or simply to produce premium performance lubricants.

Search the Lube Assist product range to find what you're looking for quickly. 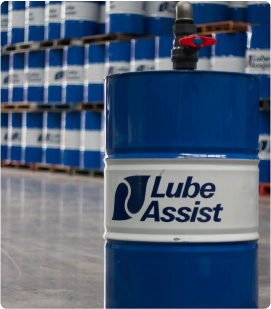